The AADL in partnership with Conor O'Neill's is hosting a pub reading series on the 4th Sunday of the month through July. These are a series of staged readings of some really cool plays. This Sunday there will be a performance of Eurydice, which has been described as "sort of like Alice-in-Wonderland if Alice went and reconnected with her dad in the underworld." Doors are at 6:30 and the performance starts at 7. Sounds like a fun event.

You must see Cinderella this weekend at the Power Center 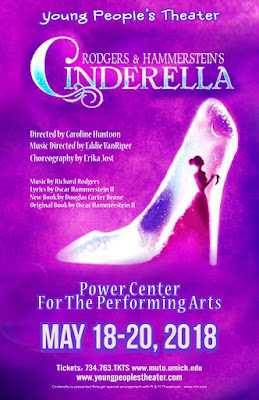 Gentle reader, you should make plans to see YPT's production of Cinderella at the Power Center this weekend. It's the 2013 re-write of the Rogers and Hammerstein classic. That means it has all your favorite songs but the story emphasizes some strong progressive elements. The show was choreographed by my wife, and Damn Arbor's chief counsel, Erika Jost, who declined to be interviewed for this article. Here's why I am excited for the show: First, there are 104 cast members. You almost never get to see a show with so many people in it. It is really amazing to see choreography being executed on a stage with so many people on it. I've also had a chance to see some of the costumes and set for the show, and they look completely amazing.

Tickets are just $15 for Adults and $10 for Children, Students, and Seniors. There are evening shows on Friday and Saturday at 7 pm as well as matinees on Saturday at 1 pm and Sunday at 2 pm. You don't want to miss this show. 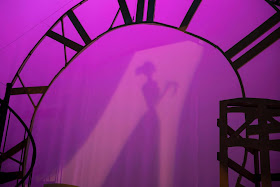 Gentle readers, today is the first election of 2018 if you live in in the Ann Arbor Public School District, Sharon Township, or Ypsilanti Township. The proposal in AAPS is to re-authorize the 18-mil operating millage for the school district. (The actual proposal is for a 21-mil tax which is three mil higher than allowed under state law. The extra 3 mils are a buffer against Headlee rollbacks. Read more about this at AnnArborVotes.Org) Without getting too much into the weeds, taxable value is about one half of market value. So if you own a home, and it’s worth $200k, your taxable value would be $100k. An 18-mil property tax would cost you $1800 per year. Sharon Township residents will be voting on whether the Township should take out a loan, not exceeding $4,900,000 to build a municipal broadband system. Ypsilanti Township residents will be voting for a 0.50 mil tax to provide equipment for the Ypsilanti Township Fire Department and to fill a vacancy on the Township Parks Commission. You can read more about the proposals here.

Remember gentle readers, don't just go out and vote yourself, harass your friends and family and make sure they vote too. 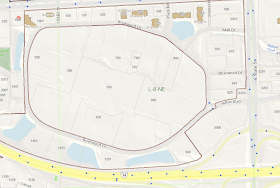 Gentle reader, today is the first regular meeting of the Ann Arbor City Council. It would be the first #a2council meeting of the month if it weren't for the special session on May first. Given the recent rash of special council sessions, this will make the fourth consecutive week with a council meeting. What a treat.

On the agenda, you will notice we're deep into street closure season. On the 19 item Consent Agenda, there are 5 street closures. Highlights include Top of the Park (June 4th through July 4th) and the Tech Trek (June 15th).

There are also 5 ordinance first readings on the docket. These won't get public hearings unless they pass the first reading and come back up for a vote as a second reading at a future #a2council meeting. The first (C-1) would rezone a small portion of the Briarwood Parking from parking lot to C2b (Business Service District). Gentle reader, I tried to read the whole staff report on this, but it's pretty long. I did learn that Briarwood, as we know it, is actually 5 parcels owned by 5 different legal entities. Fascinating. C-2 is on a change to water and sewer rates. Ed Vielmetti has a good writeup about this in his newsletter from a few weeks back. C-3 concerns sidewalk repair and C-4 is on noise control. Finally, C-5 concerns the Medical Marijuana Facilities.

Gentle reader, it's a pretty long agenda and I am sure I have overlooked something. Please let me know in the comments what you think the most interesting agenda items are. Make sure you tune in tonight at 7 to watch CTN's live stream and follow the blow-by-blow action on #a2council hashtag on Twitter.

May First Friday tonight in Ypsi 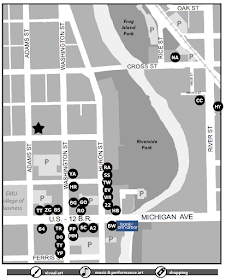 Gentle readers, tonight is the second Ypsi First Friday of the year. Looks like there will be 21 venues hosting events ranging from live music to art galleries. Ypsi's new maker space, Tinker Tech, will be celebrating their grand opening tonight as part of First Friday. It should be tons of fun. Hope to see you there. 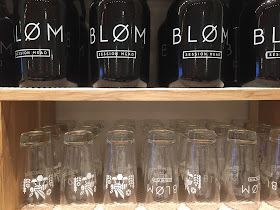 Bløm Meadworks, Ann Arbor's first meadery is opening this Saturday at Noon. It's located at 100 S 4th Ave on the first floor of the Courthouse Square apartment building. I went to undergrad with Lauren Bloom, who co-owns the meadery with her husband Matt Ritchey. They were kind enough to grant me an interview and give me a tour last Friday.

Matt cut his teeth as the head brewer at Chicago's Begyle Brewing. While he was brewing though, he discovered he was allergic to gluten. Bløm Meadworks is a way for Matt to maintain his love of brewing without poisoning himself with gluten. His experience brewing definitely shows in the quality of mead Bløm is producing. The mead at Bløm is quite good and made from Michigan honey, which is pretty cool. There are plans in the works to make some smaller batches with honey from Washtenaw County.

Mead is pretty simple to make as far as alcohol goes. You take honey, mix it with warm water and wine yeast and let it sit for a while and you've got mead. From that simple recipe though, you can create a wide range of different flavors. Because the ingredients are not boiled before fermentation, a lot of the volatiles from the honey are preserved in the end product. Bløm specializes in session meads, which have an ABV closer to that of beer rather than wine. Bløm's meads are dry to semi-dry and range from 6.2% to 6.4% ABV. I sampled two on my visit and they were both delicious. The first one I tried was the Hopped, which as the name suggests is a lightly hopped mead. It was nice and crisp with a bitterness that was not overpowering. It had a really nice floral finish somewhat reminiscent of goldenrod. The second mead I tried was the Spring Gin, which is brewed with the Ann Arbor Distilling Company's botanicals that are left after the distilling process. The Spring Gin mead was very light and crisp and had a subtle lavender finish. I expected it to have a very strong juniper flavor, and was pleasantly surprised at how well the flavors were balanced. I think it's the perfect thing to drink on a nice spring night.

Another exciting thing about Bløm is that it has the potential to really liven up the streetscape in a slower corner in downtown. The areas just one block north and one block south are pretty vibrant. Bløm gives will give people a reason to hang out on this stretch of 4th Ave and might bring some life to the area. There are also two more commercial spaces available on the first floor of Courthouse Square (the old Performance Network space) and if those get rented as well, we could really see this part of downtown change.

Once more with feeling: A very special #a2council meeting tonight at 5pm 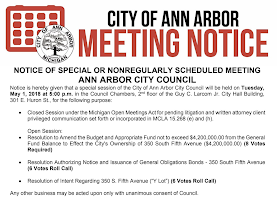 The saga of the Y Lot continues. Tonight at City Hall the Ann Arbor City Council will be meeting to consider the purchase of the Y Lot. Just like last week. Hopefully, the will again move public commentary to the beginning of the meeting. Then they will enter what promises to be a lengthy closed session. If you have strong feelings about the future of the Y Lot (and you should), consider showing up for the meeting, or at least watching the live stream on CTN's YouTube.