Few Super 8 films have captured local hearts and minds like Danny Plotnick's 1986 classic, Skate Witches. The 2 minute short was shot on the Diag in a single day while Danny was a student at U of M. It features a gang of female skateboarders, the Skate Witches, who terrorize male skateboarders. Also the Skate Witches have rats. Despite the films brevity, it really captures the zeitgeist for the mid 80s alt scene. I reached out to Danny, who is now the Director of Film Studies at the University of San Francisco, recently and he agreed to answer a few questions about Skate Witches for me. Below is our email interview.

Damn Arbor: Could you tell me a little about what inspired Skate Witches, or what lead to its filming?

Danny Plotnick: Dana, the witch in the Misfits t-shirt, had talked about wanting to get her old skateboard from her family home and bring it with her back to Ann Arbor. Obviously, Ann Arbor spreads out, and she thought a skateboard would be a great way to get around town a lot quicker. However, she felt she would get hassled by all the boy skateboarders in town. I don’t know if any women were skateboarding in Ann Arbor at that point. If they were, they were few and far between. Dana mentioned this when we were all hanging out. Karen, the queen witch, mentioned she used to skate when she lived in Grand Rapids. I joked that they should form a gang called The Skate Witches. Jenny, the witch that keeps pushing guys off their skateboards, said she didn’t skate, but she’d be happy to join the gang. Dana and Karen never really did get their boards. I liked the notion of them forming a gang in real life, but when it seemed like that wasn’t going to happen, I was convinced that, regardless, we needed to make a movie. So I wrote the movie, they got their skateboards, and the rest is history.

DA: How did you find the actors? Do you still stay in touch with the Witches? Did they really all own rats?

YpsiGLOW is this Friday. Check out the above video from last year. Marchers with luminaries will gather at two places: the Water Tower and Depot Town. Then at 6:30 they will march to Downtown Ypsi and gather on Washington Street. Here's a map of the route: 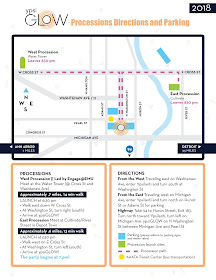 The party on Washington goes from 7-10 pm. Hopefully we will see you there.

Gentle readers, the days when you had to dress your majestic backyard ducks as common chicken may be drawing to a close. That's right, the City Council is poised to legalize backyard ducks. Looking at the agenda for tonight, the first reading of the Duck Ordinance (C-1) may be one of the lest controversial items on the agenda.

The #a2council agenda starts off with a stacked consent agenda docket with 24 items. Of note, there are 4 sanitary sewer easements on the Consent Agenda tonight. Two of tonight's public hearings (PH-1 and PH-2) are on the annexation of Township Islands. This issue has been contentious at recent #a2council meetings. When the city annexes a township parcel there can be an increase in taxes of $1k to $3k per year and fees of up to $100k for sewer and water connectivity. You can read more about the township annexation program here.

There are a couple of other especially spicy items on tonight's agenda. First, PH-4/B-2, the Mayor's Police Oversight Ordinance, has not been received well by members of the Police Oversight Commission Taskforce and by those who seek robust civilian oversight of the police.

The other spicy item on the agenda is DC-4, is a resolution to approve a Deed with Core Spaces for the Library Lot. Whoa. This will pit the faction of the city council that are in support of the development agains those that would rather see the Library Lot undeveloped.

Gentle reader, what are you most looking forward to at tonight's #a2council meeting? We are well into campaign season so there may be some political fireworks. Make sure you tune in tonight at 7 to watch CTN's live stream and follow the blow-by-blow action on #a2council hashtag on Twitter.

Today is the last day to Register for November Election

Gentle reader, this coming election is very important. I cannot emphasize how important it is for you to vote. Today is the last day to register to vote, or update your registration for the November election. You can check your voter registration here. In celebration of this monuments day, our friends at 7 Cylinders Studio in conjunction with Washtenaw County have released the 4th video in their how to vote series. Check it out, then make sure your registration is up to date.

A map of the proposed Food Truck Exclusion Zone

Sass's analysis is through, and their methodology is very well documented. My only fear is that the map may not accurately depict the size of the Food Truck Exclusion Zone. Section 8 in the proposed ordnance reads:

There shall be a minimum 200-foot separation from any residential use or residentially zoned district. ...

I interpret this to mean that food trucks would be forbidden not just within 200 feet of residential properties, but also PUDs or Commercially-zoned areas that have residential units. So if anything, Sass's efforts underestimate the size of the Exclusion Zone.

You should really check out A2 Civic Tech and read the whole analysis and see all the maps. As a little teaser, here's a map that really captures the 200 foot residential buffer on the Food Truck Exclusion Zone. The map shows South State Street and South Industrial. The top most horizontal road is Henry St. 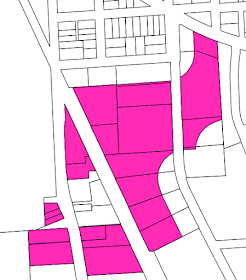 One week left to register to vote in November Election

Gentle reader, there will be so many important things on the November ballot that I don't have time to list them. Here are some highlights, though: local elections, legalizing cannabis, and ending gerrymandering. You need to vote. You have just to make sure you're registered. Fortunately our friends at 7 Cylinders have partnered with Washtenaw County to produce videos on how to get yourself registered.