Pictures from the Dirty Wolverine

I've been somewhat curious about the recent surge in the prevalence of pop-ups. It seems like over the last few years, the number of pop-up restaurants, pop-up stores, and pop-up art galleries, has increased dramatically. I had thought the increase in pop-up popularity was because it was a relatively safe way to test the marketability of an idea for a risk averse generation. Ashlee Arder, proprietor of the Dirty Wolverine has a different idea. She believes pop-ups are popular with our generation because of the exclusivity they offer. I wasn't anticipating that response. The more I have thought about it though, the more I think Ashlee is on to something. Beyond reflecting a much lower capital investment than more traditional brick-and-mortar stores, pop-ups are exciting. Knowing a store will only be open for a few hours makes it much more intriguing to visit. There is a festive atmosphere. Pop-ups are able to capitalize on the excitement of a grand opening celebration every time they "pop up." 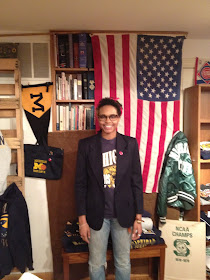 Ashlee Arder in front of her wares.

Ashlee has a great sense of aesthetics which is reflected in the displays she creates with old wooden boxes and shipping pallets. 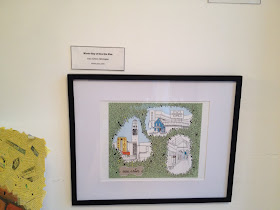 Check it out. The cover illustration to the Design*Sponge guide to Ann Arbor. It's by local illustrator Nicole Ray who blogs over at Sloe Gin Fizz. 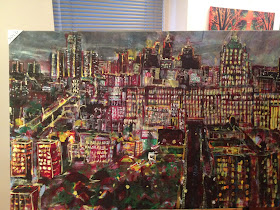 Painter, Adam Bota, had several of these awesome paintings of the Detroit skyline. Unfortunately, this one had been sold.
All in all, I was pretty impressed by the offerings from the Dirty Wolverine and the artist at Thursday's pop-up event. I think there was a synergistic effect of combining vintage clothing with the artists there. At this point, Ashlee does not know the exact date when the Dirty Wolverine will be popping up next, but we can expect to see it back sometime in the next few months.
Ben Connor Barrie at 12:02 PM
Share