As a distraction from the hours spent stressing over the 2020 election, my family has been exploring the idea of generating our own power with rooftop solar panels. After attending a Solarize session recently, I chatted with Julie Roth, who works as the Program Lead in the city's Office of Sustainability and Innovation. This innovative program grew organically out of her own experience in 2019, when she led a group discussion about Solar in her own home.
Roth says she was quite surprised by the program's success - at the pilot first event, she "expected a few people sitting around awkwardly trying not to make eye contact with the installer." Instead, 40 people showed up in her living room, and 11 of them signed up for a new solar install.
This year, the city decided to see if this grassroots pilot program could scale up. It exceeded all expectations. Despite the pandemic, there have been 8 Solarize meetings this year, with nearly 100 new installs through the program.  Now on almost a monthly basis, neighbors come together to spread the word about the benefits of solar power, and get a hefty discount in the process.
The program works like this: First, a homeowner gets quotes with select installers locally who have been vetted through the Michigan Saves green bank, and the city acts as a facilitator for the group buy process. Second, neighborhood yard signs, posts on social media, and emails go out to residents who express an interest in solar. Next, the lead homeowner, installer, and Roth facilitate a group information session via Zoom, covering the economics and process of putting up solar panels. Finally, after this informal low-pressure meeting, anyone interested can set up a free quote with the chosen installer. If others move forward with the installation process, the group can get up to a 15% discount.

The Changing Economics of Solar

Big changes are coming for Solar incentives in the US, including sunsetting federal tax credits. For 2020, all installations are eligible for a 26% federal income tax credit, but most installers are booked for the rest of the year at this point. For 2021, that tax credit decreases to 22% - still thousands of dollars on a typical install. In 2022, the tax credit disappears entirely. As of early 2021, congress has now extended the 26% federal tax credit through the end of 2022.
In 2019, DTE successfully lobbied to change the rate it pays for any excess generation that it purchases from its customers who generate electricity from rooftop solar. Previously under net metering rules, DTE paid full price for any excess energy a customer generated. DTE argued this arrangement is unfair, and now essentially pays households half the amount it previously paid. It is still is cost-effective to have a solar installation, but now it takes an average of 13 years for a solar array to pay for itself, rather than 8 previously under net metering. Solar panels usually have expected lifespans of 25 to 40 years, so even with DTE's less generous reimbursements, Solar remains a bit of a no-brainer.
It can sometimes make more fiscal sense now to build a solar grid which provides the amount of energy you use during daylight hours, rather than a system which covers 100% of your use. Any energy you generate that goes back into the grid is essentially worth half as much as the energy your house consumes.
If you’re curious about your own power use, DTE has a helpful smartphone app called “DTE Insight” which can show you how much power you are using during the day. For our household, much of our energy consumption comes in the evening when a solar panel is generating little to no electricity. Some of this could perhaps be offset by behavior change- for example we could purchase an electric dryer that has a delay start feature, and set it to run while we are at work. Unfortunately, our plug-in hybrid will likely always draw most of its power from the grid. When my wife gets home from work and plugs it in to charge, the sun has already set.
As an aside, the 30% federal income tax credit on electric vehicle charge stations expires on December 31st 2021, so get it done now if you're thinking about purchasing one.

Setting aside pure economics, one of the big reasons to use solar panel is to offset your own fossil fuel consumption and greenhouse gas emissions. Even though DTE no longer pays the full rate for the excess electricity you produce, that electricity does go back into the grid, powering neighborhood homes in a much cleaner fashion than the current DTE mix - which is mostly coal-generated and only 8.67% renewable. 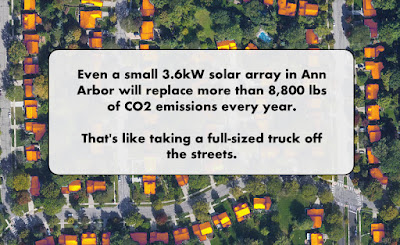 If your primary goal is to offset your own carbon footprint, then the best choice is to build the largest system you can afford, and that you are allowed to - you cannot build a system that covers more than 100% of your average use over the past year. This also means that to a certain extent, it makes more sense to build rooftop solar prior to reducing energy use through insulation and purchasing energy star appliances. With a larger array, if you end up adding electric appliances or an EV down the road, you have some excess power to cover it.

Changes on the Horizon

Could President-elect Joe Biden and a Democratic majority in the Senate change the economics of Solar in the future? Certainly, but even if the Democrats control congress, it's unlikely the value equation will improve substantially - the tax credits could still disappear, as some argue these credits were meant to make Solar installs cost-effective, and they have succeeded.
The 2020 election has proven that the future is uncertain, and perhaps it's best not to try predicting things like the existence of federal tax credits.
There is also a little-known rule in Michigan limiting how much peak power can come from rooftop solar. Currently DTE and Consumers Energy allow just 1% of their peak power from rooftop solar grids. Consumers Energy is reaching that limit quickly, with DTE not far behind. There is a bill to change this rule, but it’s currently stuck in committee.  Utilities can also voluntarily extend this limit, but as of now there are no indications they would do so.

If much of our use is at night, and the excess energy produced is sold to DTE at half of retail rates, then what about a battery? With a battery like Tesla’s Powerwall, a family can store excess energy for use after the sun sets. A battery can also act like a generator in a power outage - without one, a solar array will not provide your home with power when the grid is down. 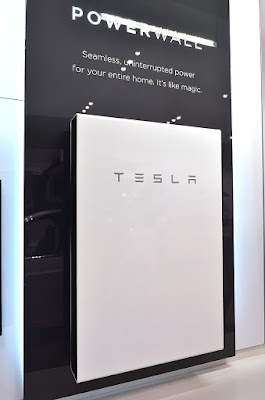 We’re not considering a battery at this time, mostly due to cost, degradation, and environmental concerns. One Tesla Powerwall unit costs about $11,500 installed - which is about the same price as a midsized solar installation. At that price they essentially never pay for themselves. The batteries are only guaranteed to last 10 years at 70% of their original capacity, which is much shorter than the 25-40 years expected out of a roof installation. Ecologically, it makes more sense to use the power generated than to store it, considering the heavy metal mining required to make modern batteries.

If you're interested in learning more about generating clean energy for your home, contact Julie Roth at the Ann Arbor Office of Sustainability and Innovation, and her team will fill you in on the details. She's fantastic to work with, knows her stuff, and her enthusiasm for making A2Zero a reality is quite infectious.

You can also put your address into the SunNumber website to find out if your roof is reasonably well-suited to get sunlight. Keep in mind that unshaded south-facing roofs are ideal, but accommodations for others can still be made, and ground-mounted solar installations are also possible.
For my family, we've decided to move forward with a system that will generate about half of our electricity, as it's the size that makes sense for us at this time. We're looking forward to sunnier days in 2021, in many ways.
Erich Z at 9:06 PM
Share