Art Fair Bingo has a history that stretches back over two decades. Let's take a look at the bingo cards over the years.

According to osric.com/bingo, the authoritative source of Art Fair Bingo history, the game goes back to at least 1999. That said, some folks online have a distinct memory of Art Fair Bingo in 1998. The 1999 version is credited to the Tanya of the Blast-Off Girls, a WCBN show. The earliest digital versions I have been able to find are 2004 (above) and 2005 (below). 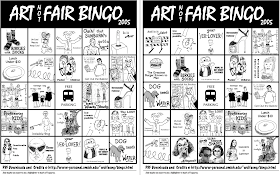 The most recent true version of Art Fair Bingo that I have been able to find is the 2017 edition by Umich grad, RJ Cron. 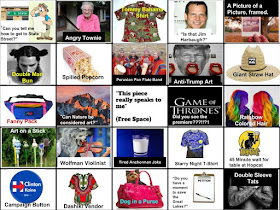 We also have an undated Art Fair Bingo card that appears to be from the late aughts: 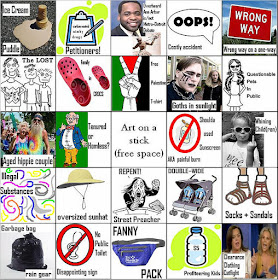 If anybody has other Art Fair Bingo Cards, please share them. There are digital traces of a 2007 edition I would love to see. And of course, if someone has a copy of the 1999 or 1998 cards, that would be awesome.